What an incredible sight today!

At 7am this morning whilst letting all my dogs out i thought i see our resident Heron fly above but when i looked up the bird i see had a huge wingspan with finger like ends to it's wings. My husband who was cooking our dogs breakfast said it looks like some kind of Hawk and definitely big enough to pick up one of our pups who play in their outside area surrounding the puppy house during the day. We decided to keep their cat flaps closed until we knew what to do to protect the puppies who then started a protest by taking it in turns to scratch as hard as possible on the locked flaps. So intelligent even at 7 weeks of age!

The picture you see here is what we took with our telescopic lens at about 100m as the bird landed on a fence at the edge of the garden, if you click on the photo it will enlarge so you can see it's beak and claws. 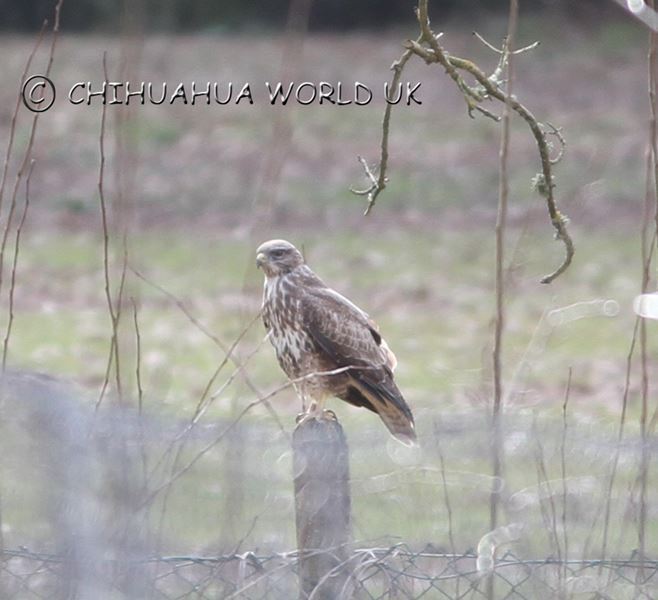 My husband suggested we call the local wildlife society so we knew what we are dealing with as this could be of some concern, we could see it was a very large bird of prey, the wingspan was in the region of 2 meters, just over 6ft in old money!

After a couple of phone calls we were advised by our description that it was probably a Kite, apparently an rare site a few years ago but due to the reintroduction of breeding pairs they are now flourishing in Southern areas of the UK. I think you will agree it is a beautiful looking bird and certainly a rare sight for me so we had to think of the best way forward being as my puppies could look like a nice meal for it as they could be mistaken for rodents to the Kite.

What we came up with was to put some bird netting over the outside puppy area so any birds can see as they approach that the area is protected so they cannot land. Not ideal as our local birds play a part in my facilities believe it or not, when my dogs all come in around 5pm their playground sees lots of birds picking up crumbs of any food that has been left around from their daytime feed, especially winter time when food is scarce for the birds.

Just another challenge in a Chihuahua World day!!

~OMG The Sun is Out~
Welcome to Chihuahua World's Blog

I'm the owner of Chihuahua World UK.  Follow my blog for the latest news from us.

By accepting you will be accessing a service provided by a third-party external to https://www.chihuahuaworlduk.com/